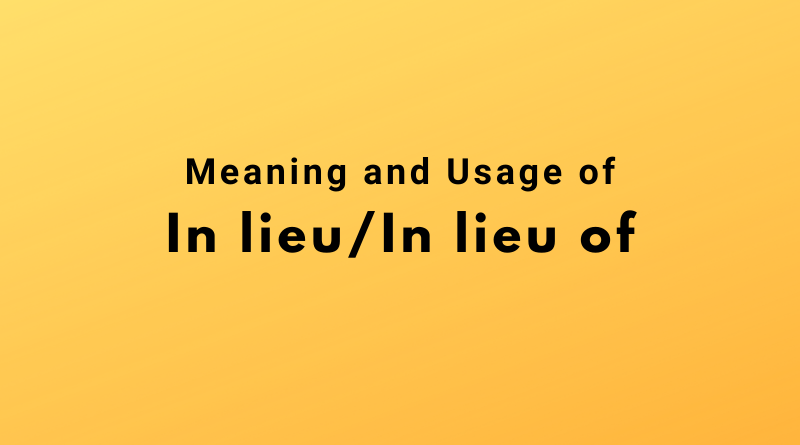 In the Bible, we found that Judas, one of Christ’s disciples, handed over Jesus Christ to the Jews in lieu of thirty pieces of silver coin. ‘In lieu of meaning is when a thing is used as a substitute of any other element. Here, we will discuss the importance of in lieu and also when this term is used. So, let’s get started.

In lieu of: meaning and definition:

In lieu is a term that is frequently used for trades and commerce and also for economic purposes. For instance, a restaurant with a lack of ingredients for serving minestrone can serve tomato soup in lieu of that minestrone soup.

This term can be used for business purposes when someone offers you something as a substitute for cash. For example, ‘he gives me chocolates in lieu of cash.’

‘In light of,’ can also be used for in lieu of. ‘In lieu of recent occurrences, more awareness is required in this sentence in lieu of is used as in light of. But in this reference, the term is not rightly used.

The phrase ‘in lieu of’ hails from the Latin word ‘locus,’ which refers to a place. Therefore, the meaning of in lieu is ‘in place of.’ The translation of this term comes from the French word au lieu.

Usage of in lieu in a sentence

Here are two sentences in lieu of:

Alternatives of in lieu

Some alternatives can be called in lieu synonyms. They are,

Financial use of in lieu

Deed in lieu of foreclosure

A prospect choice that a borrower can use is the deed in lieu of foreclosure.’ It can help them to get rid of ceasing their possessions before time. The borrowers sign an agreement with the moneylender where the lender clears all the debts by keeping the possession like a home in a mortgage. In that case, both should be mutually agreed upon and maintain trust in each other.

The deed in lieu of foreclosure can only occur when a mortgagor can’t pay back the debts to avoid the property closure process.

The deed in lieu of is beneficial for both the lender and the borrower. The mortgagor is instantly free from personal loans and does not need to face any social obligations of a beading process, and he/she may have improved conditions than the foreclosure process. His/her credit ratings will not have much impact on this deed.

Acceptance in lieu is a section of UK tax law. Under this law, inherited tax loans can be released in return for the acquisition of property with national or heritage value.

The Chancellor of the Exchequer, David Lloyd George, first launched the phrase ‘acceptance in lieu.’ It was a path for rich people to pay the higher rate of heritage property taxes that the People’s budget of 1909 added.

At present, properties of national value or heritage buildings are collected and offered to the museums or the National Trust. The Arts Council of England carried out this policy. Many national properties have been received by the organizations where people have access in place of being someone’s private property due to this law.

In Cambridge Dictionary, this scheme is used to describe in lieu meaning. “The paintings were left to the nation by the Duke of Norfolk in lieu of inheritance taxes.”