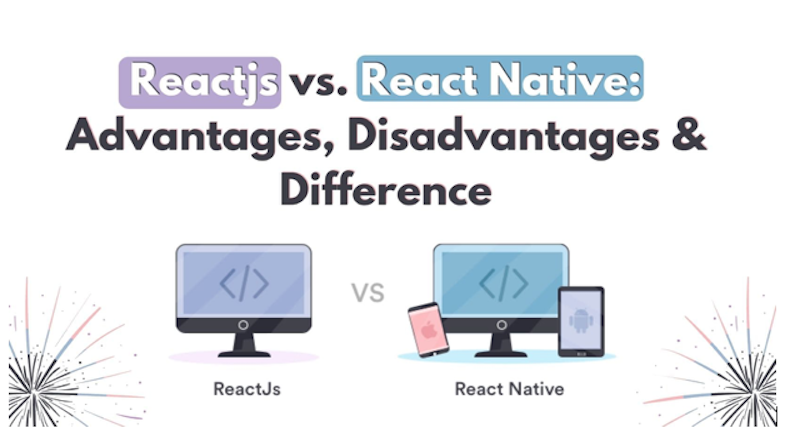 If you have been in React Native App Development for a while, you are probably aware of these two tools. Yes, we are referring to Reactjs and React Native. Facebook initially launched both these tools, but since then, it has had a wider fan following.

Wouldn’t you like to know a bit about their history?

Initially, in 2011 when Facebook was integrating some updates, they faced problems that slowed the process down. They had the model, but their user interface was yet to be modified.

Jordan Walke, an engineer at Facebook, used XHP (an HTML component library for PHP) to create FaxJS, which was the first prototype of Reactjs.

What is React Js?

What is React Native?

React Native is a mobile application framework that uses Reactjs for the development of apps and websites that can run on different mobile operating systems.

You can easily use React Native to build a mobile application that is compatible with Windows, Android, iOS in JavaScript.

Furthermore, Reactjs is used to build components under React Native, or React Native uses Reactjs under their framework.

Although you will find multiple similarities between Reactjs and React Native, there are some noticeable differences as well.

What are the Advantages of React Js?

The major USPs of Reactjs is its capacity to acquire blasting speed for the applications and sites created. This is done by utilizing the Document Object Model or DOM.

This gives an edge to Reactjs, contrasted with other platforms for creating versatile applications. As you know speed is one of the significant elements for making an effective application.

Lastly, here’s the best advantage of Reactjs. Reactjs has a huge community of developers. Now you might think, why is this an advantage? Well, these developers have created an ecosystem of Reactjs with blessed tools, component libraries, IDEs, extensions for code editors, web browsers, and more.

Having access to so many tools helps developers to a whole new dimension of innovation. This makes ReactJs one of the most powerful options to create your mobile applications as well as apps.

You might have heard about component-based architecture before. Well, Reactjs introduced this concept which helps developers to reuse components. Hence, you can save both your time and energy!

Component-based architecture simply takes a larger piece of user interference and converts it to an independent microsystem.

So, these are the major advantages of Reactjs that make it unique.

In order to access the true benefits of using Reactjs, users have to download another enabled library. Hence, it increases both the time overload as well as the cost.

As you have known earlier, Reactjs supports several third-party libraries. However, it supports very few native libraries. Now, you can use external libraries to utilize HTML and CSS functionalities and build them into JSX. But this can prove to be a rather complex process.

Requires a lot of native workarounds:

Assuming that particular functionality isn’t found in React Native, then, at that point, you can go through two approaches.

In a word, React Native builds overheads on two things, costs and time.

If you are a developer new in the field of app development, it might be tough for you to have a good grasp on Reactjs.

What are the Advantages of React Native?

Reactjs supports the recent Reloading feature, which provides developers the freedom to reload a mobile app mechanically. This makes the method of development quick, and it saves time.

One of the biggest advantages of using React Native is the ability to write platform-specific code.

When you use React to build an application, it automatically detects which platform it is supposed to run on. This way, it generates codes that are specific to that platform.

So these are some major benefits of React Native that make it unique.

Component UI libraries exist within React Native. You can use it for a smooth and easy-to-use User interface experience.

Such sharing of UI libraries like Shoutem, native base, Expo, et al. is less time taking and can be easily created from scratch. Moreover, you can focus more on the innovative part than investing your time in creating libraries from scratch.

A front-end developer can also use React Native to create an app. This is because they use JavaScript for most of their codes. So, all you have to learn is JavaScript!

Loosely held abstraction layer: In React Native, you will be provided with tags that replace HTML, stylesheet that will replace CSS, and you can code with JavaScript. Now, although it has advantages, sometimes this may lead to class in logic.

Both Reactjs and React Native have set their footmark in the field of app development. They have an ever-evolving system of libraries along with multiple flexible functionalities, making them the talk of development work. However, the tool you should be using for your development should be based on your specific requirements.

Read More: What is SEO