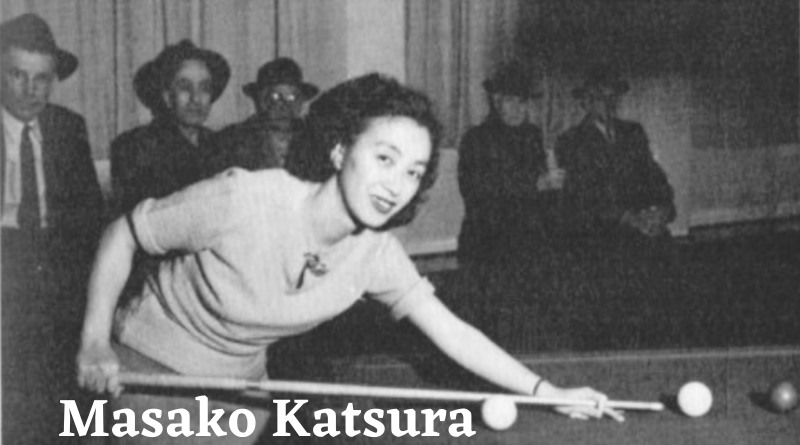 Masako Katsura was a Japanese carom billiards player and was most active in the 1950s. She was famous as the “First Lady of Billiards.” Masako Katsura set an example for ladies by participating and standing as the best in the sport where only male participants were prevalent. Masako Katsura’s billiards learning was started by her brother-in-law. After that, she took training under Kinrey Matsuyama, the Japanese champion’s teacher. Masako Katsura became the only Japanese professional billiard player. Katsura took part in the nation’s three-cushion billiards championship three times and stood second. This blog will discuss the early life, legacy, and exciting facts about Masako Katsura. So, let’s get started:

Who was Masako Katsura?

Masako Katsura is a Japanese sharpshooter who, as the first woman, had the record of winning an international billiards title on seventh March 1952. She was a legend who had shown the courage to play a previously male-dominated sport. She set the trend for other females to play the game and offer significant contributions.

Masako Katsura was also the first lady to represent billiards on the international platform. In a sport where men took part, only Katsura was an invincible competitor and became famous quickly in Japan. After that, she began to win the other parts of the world as a billiard player. She participated in an international billiards competition and beat whoever stood at the opposite.

In an orthodox family, Masako Katsura was born in 1913 in Tokyo, Japan. After her father’s death, Katsura’s mother became more strict; at the same time, she motivated Katsura to play billiards. Masako was only fourteen when she played billiards for the first time.

At an early age, she started having some medical complications. She didn’t have adequate strength and felt tired most of the time. This persuaded her mother to take her to billiards class so that she could acquire some power and become stronger physically and mentally.

In the 1920s, billiard was highly famous in Tokyo. Her brother-in-law’s pool Masako Katsura was identified with her talents for the first time. So, in the pool halls, Masako Katsura got a permanent job, and she began her billiard practice.

Masako Katsura’s age was fifteen when she became the champion for the first time. Due to her talent, the billiard winner of that time in Japan, Kinrey Matsuyama, undertook the responsibility of her coaching. He also made Katsura learn three-cushion billiards.

Katsura had a fancy for playing trick shots, and with her newly explored knack for three-cushion billiards, she added a special touch to the game and, thus, started to progress even beyond her expectations.

The second World War severely impacted the fortune of Masako Katsura. But she tried to make progress as best as possible. She first performed a one-woman show for a Japanese group. After the war ended, she started to perform billiards for American groups.

This initiative was the first step to her international success. She became famous quickly due to her talent, and a champion named Welker Cochran asked her to come to America.

She shifted to California, America, in 1951. But women were inactive in America in billiards. It was utterly a region of men. Masako Katsura started to work with Welker Cochran and became her manager. She got respect from other billiard players. Katsura started to play more games, and her skills became unfolded, making the media and her critics spell-bound.

She was the inspiration for many women in America and became an icon of billiards throughout the world. Through the 1950s, she played successfully irrespective of sex. She retired in 1961 after a defeat to Harold Worst.

Nevertheless, she was the first woman to participate in the international billiards championship, making her “the first lady of billiards.”

Masako Katsura was the founder of a new domain for females. She was as strong as males and had the grace of a woman who attracted even women to try a male-dominated sport.

In 1976 Masako Katsura was seen at a billiards parlor in San Francisco for the last time. She played around and scored a hundred-point run. Unfortunately, she has typically vanished after that. By the 1970s, a crew of billiard players created the Women’s Professional Billiard Association and offered her an authorization into the Hall of Fame.

Katsura came back to Japan, and she died in 1995. She had remarkable contributions to the field of billiards. Her talent and skill made her a regular character in pop art, and she also possesses Google Doodle animation of her own and books are also available about Katsura. Her abilities and contributions are really praise-worthy and make her a legend.

Husband: a US Army non-commission officer Vernon GreenleafRetired in: 1961